Git has become the de facto version control system used by software engineers. It's an incredibly powerful tool for project collaboration, but is often feared and misunderstood. Just in the past month, I have worked on three projects with small teams and on each team there was confusion about using git, particularly in a team environment.

I would like to present a git workflow model that I have distilled down to a concise and easily digestible process. Use this model to lay a solid foundation for effective software collaboration. This basic workflow can also be easily extended as teams grow and projects become more complex. I'll provide a few examples for extending the model at the end of this post.

For this example, I'll use GitHub as the remote repository as it's currently the market leader (Bitbucket is a good alternative). I'll also assume you're familiar with basic git.

Here is a diagram I put together for visualizing the basic git workflow process we'll be building out: 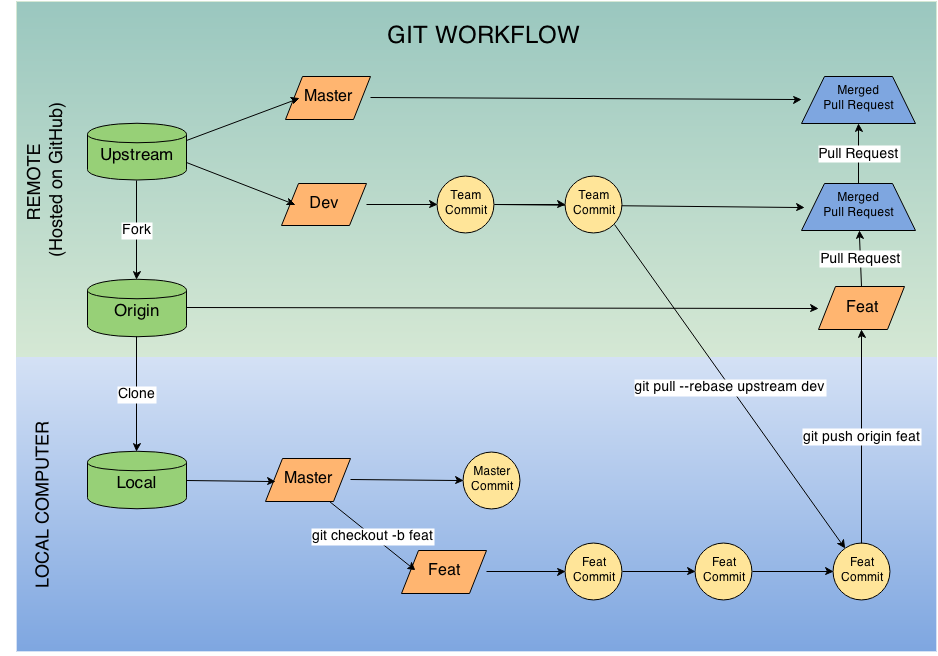 *Note: A rebase workflow can also be used where each of your commits is replayed on top of the pulled commits to form an easily readable git log. Rebase does rewrite history though. For a rebase workflow:
git pull --rebase upstream <branch_to_update_from>

Delete your remote and local branches for the completed feature and cut a new one for your next task.

Let's talk about the two branches in our organization repo:

This organization branching model can easily be scaled as your team and project grows. Here are some additional branches that are helpful for extending your organization repo: